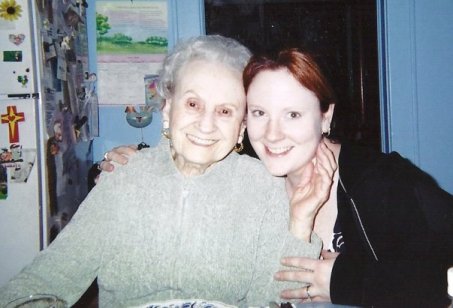 Gram was a Depression-era kid. She knew how to make the best and most delicious things out of anything and wasted nothing. Her soups, egg sammies, applesauce, chicken paprikash (BEST. EVER.), and her tuna salad are the first ones to come to mind. As I mentioned in the post for my Smoked Salmon and Goat Cheese Frittata, I often feel like she’s with me in the kitchen. As the anniversary of her passing is coming up (has it really been 5 years?!), I thought this would be a good time to share my Gram-inspired tuna salad recipe. She always made the best tuna salad and I was privy to a few of her “secret” ingredients. Through the years I have made some of my own twists to the recipe, but I always think of her when I’m making a batch. The Russian loves when I make it, often asking for it, so I usually make 2-3 cans at a time. It still doesn’t last and I’m lucky to see half of it. But that is what makes me happy…content bellies full of my food.

A word about the tuna I use. I no longer splurge on the white albacore filet kind. What I have learned is that you should look for the cheap stuff that is made from baby tuna. They have had less exposure to the environment, so the theory is that they will have less toxic things in them, like mercury(1),(2). So I get the huge pack of cans from Costco of regular old Chicken of the Sea chunk light in water. Or whatever is on sale at the supermarket. It’s best to pick up tuna in water in order to retain most of the naturally occurring omega-3s in the fish. When it’s packed in oil, the omegas can leach out into the oil (oil to oil) and you end up pouring this down the drain, but when packed in water, the omega oils stay with the fish – oil and water don’t mix.

On to the recipe. I vary this off and on based on my mood, but this is a good base recipe. Leave out anything you don’t like and add in things that you think would make it better. I love to play around with canned tuna and salmon, switching things up now and then to play around. Here are the basics: tuna, celery, onion, mayo, Dijon, horseradish, parsley, garlic powder, salt and pepper. Gram used to add pickle juice (one of the “secrets”) and I do the same if I have some in the fridge. The veggies are the key. Gram always used fresh vegetables in everything and what a difference they make to the flavor. In a pinch, I have added celery flakes and dried onion pieces from the spice cabinet along with some pickle relish, but fresh is always best. 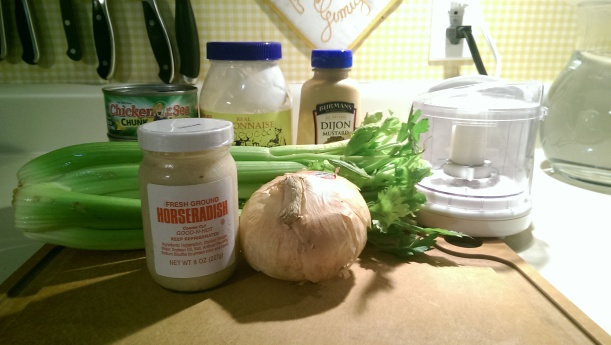 Celery is one of those things that I only buy organic. Because of this, it doesn’t always last as long and it sometimes looks a little uglier than the rest at the store. If there are some ugly spots, I just shave the celery with a peeler and then it’s perfect and ready to use. 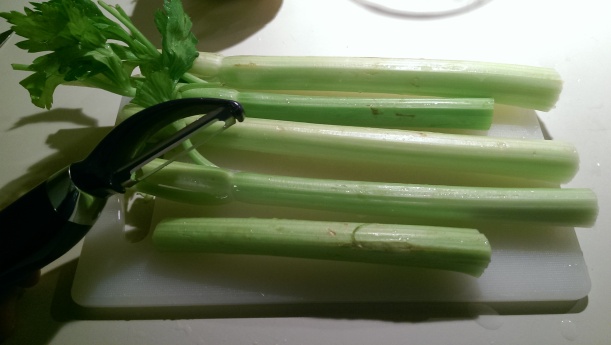 Take the cans, drain them, and put them in a large bowl to flake with a fork. 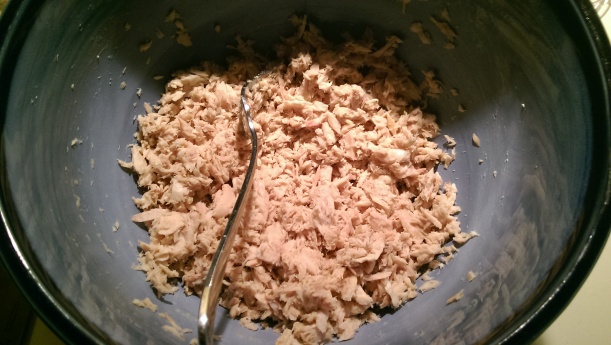 I LOVE my mini chopper that I have shared with you in the past. This cuts down chopping time and makes the celery and onions come out so finely diced that they blend perfectly with the tuna. Chop up 2-3 stalks of chopped celery (don’t forget the leaves as they add lots of extra flavor!) and a good half of a onion. Add them to the tuna and combine. I like to combine a few things at a time because I feel that it mixes better. 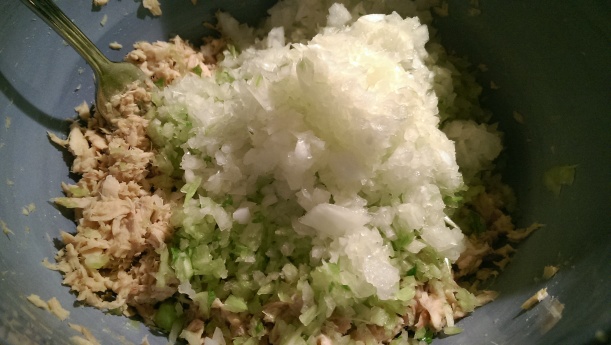 Then add a few tablespoons of chopped parsley. Stir again. 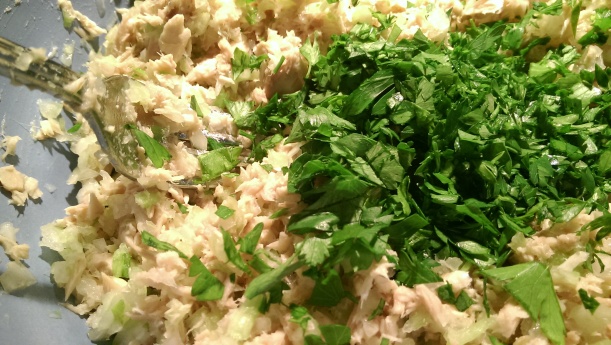 For three cans, I add about 2-3 teaspoons of horseradish, 2-3 teaspoons of Dijon mustard, and several tablespoons of mayo…maybe 4? I’m sorry, but in case you haven’t learned by now, I am not much of a slave to measurements while I’m cooking. This is why I don’t care much for baking. It’s too rigid and I can’t be free to play. And this picture was the first round of condiment additions…I pretty much doubled what you see here after tasting. Then came the garlic powder, salt and pepper, also done to taste. I would guess a good 1+ teaspoon of each. Taste and find what works for you. 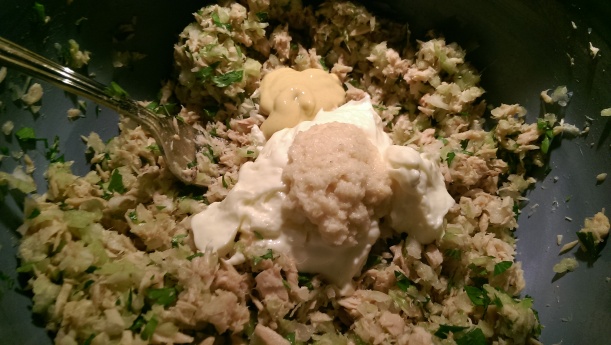 So many ways to eat tuna salad. You can put it on a salad of greens, in a wrap, on bread with tomato and cheese and then broiled…mmm…I love tuna melts. Or try one of the following options. I ended up putting a slice of cheese on this oversized tuna cracker because cheese is my downfall. 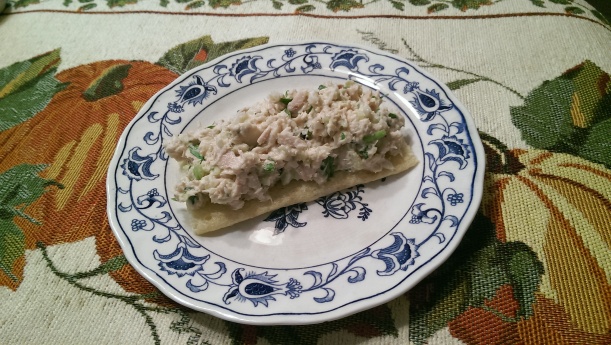 Served on one of Gram’s plates. I inherited the set 🙂

The next day, I hollowed out this amazing tomato form the market, filled it with the tuna salad, put a slice of cheddar on top, and baked it in my toaster oven, finishing it off with a quick broil at the end to brown the cheese a little. Yum! 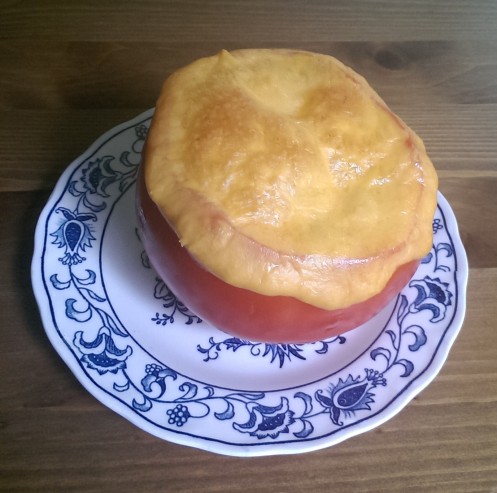 A Twist on Gram’s Tuna Salad

Following in the footsteps of my Gram, I whip up some pretty darn good tuna salads. Here is one of my many versions that I wanted to share. So many variations and different ways to eat tuna. This recipe is for three cans, but you can easily cut the quantities if you are only making one or two cans. I hope you like it! 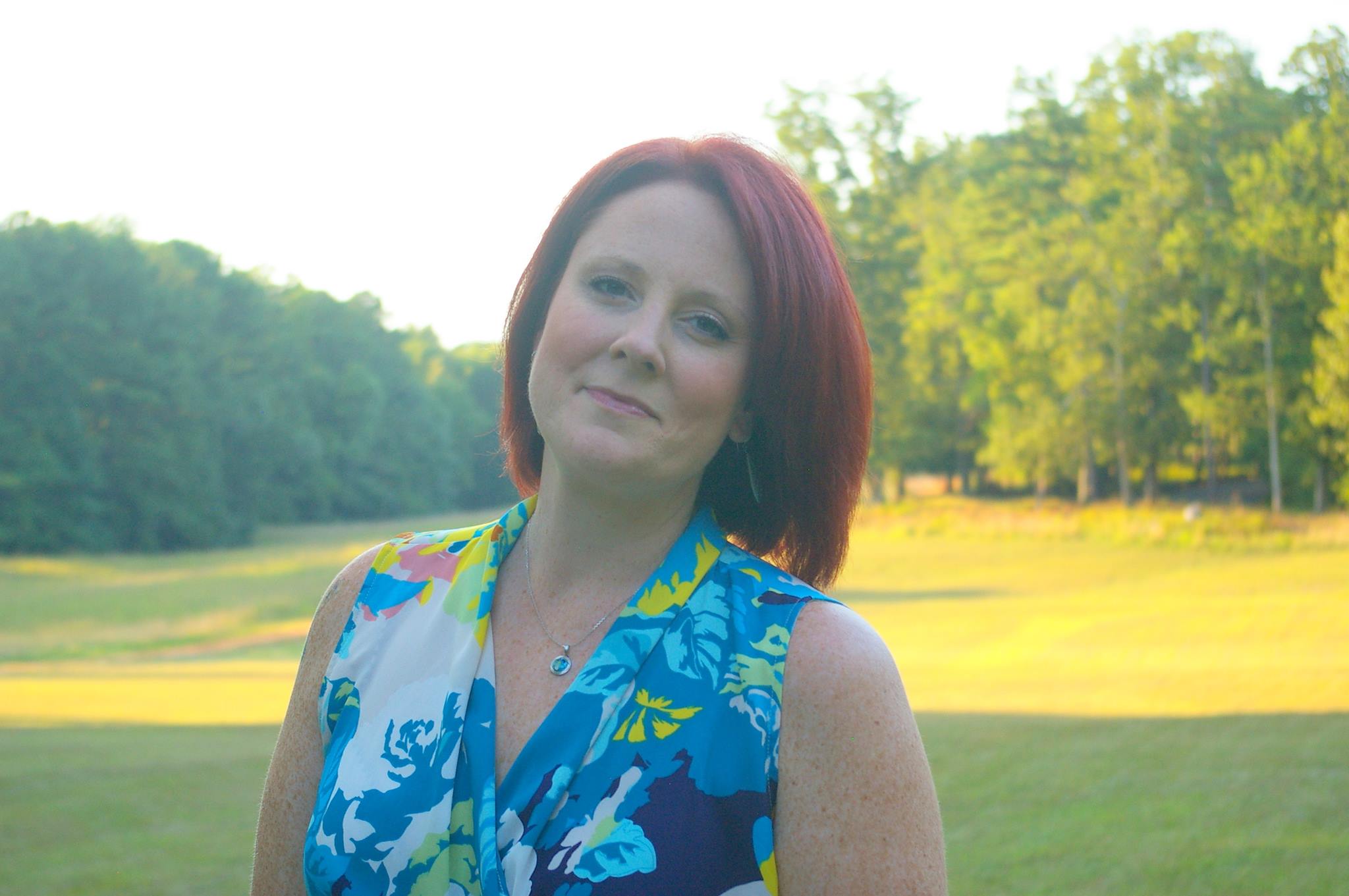