My daughter isn’t like all the other girls her age. Her preferences are cars, planes, (used to be trains), construction, and anything at all that she can build with. Dolls and dressing up? Not so much. She has a doll, but it doesn’t get any love whatsoever, poor thing. I was thrilled when at the beginning of the summer she said that she wanted to try ballet and tap. She’s struggling over wearing tights, but other than that, she absolutely loves it. And she’s pretty good, too.

I have finally been successful at getting her to watch some Disney princess-type movies with her. The order she’s seen them so far (her choice as I own a bunch of them); Mulan, Brave, Pocahontas, Frozen, The Little Mermaid, and recently, Aladdin. She has some awareness about the other princesses and their names; between me, her school friends, and ballet class, she doesn’t have much choice. I have been used to the Cars and Planes movies playing all the time, and she loves action ones like Bolt, Big Hero 6, and the Lego Movie. She is a spirited kid with an engineer mind and I have never felt any concern for her and her amazing personality. Until this morning.

On the way to school, she was going on about her costume and how she can’t wait to see what all her friends are dressed up as. I asked if she had talked with any of them about what they were dressing up as and she started to fill me in. Her boyfriends in the class whom she plays with the most will be anything from Darth Vader to a Transformer. Then I asked about what the girls will be dressing up as: Belle, Sleeping Beauty, Cinderella, Jasmine (although I think she made that last one up). All a common occurrence just like last year when I had two dozen Annas and Elsas come to my door.

Out of nowhere, I started to get nervous…for her. She’s one of the youngest in her class at barely over 4 years old. She has already been to a few 5th birthday parties and nearly everyone in the class will be 5 before May when school breaks for the summer. I have personally witnessed some of the older girls in the class being cliquey at school and parties. At 5??!!! Good Lord, it’s going to be a loooong road for this generation. The good thing is that Sugar Bee doesn’t seem to mind. She notices….she’s a noticer that misses nothing at all…but she goes on about her way and finds someone or something else to play with. She’s confident at four. It’s the future that worries me.

This is the costume that she picked out of racks of them at the store:

She has loved fire trucks since she was teeny tiny and that love has never left her. She’s wearing the hat that my cousin gave to her when we visited his fire house in Ohio last month. She’s very proud of herself and loves her costume. She wanted me to put “dragon makeup” on her so she looked like she just finished fighting a fire. I told her we can do that on Halloween. She’s so creative and is always acting out rescues with her Hot Wheels and Matchbox cars, along with all her larger police and fire vehicles. She even wanted to bring her three fire rescue cars to go with her costume!

My ramblings and slight anxiety are about my parenting. Face it, we all know kids can be mean and ostracizing. And normally, I would have never given this a second thought for her since she’s just in pre-K. But I have seen it starting already, mostly with the ones that have older siblings that then gather the ones that will be “the followers.” I just keep shaking my head, thinking, “Already?! They are only FOUR and FIVE!”

Have I taught her enough yet to make her confident about her choices? Will she be able to defend her thoughts, likes, and preferences when questioned, or worse, bullied? I could never have imagined that I would have these thoughts before elementary school; 2nd or 3rd grade was the first I really expected to have to even worry about this stuff. On the way home, I kept imagining the girls in class telling her that she’s wearing a “boy” costume. Women are firefighters, too, dammit! And it’s not like they wear a different outfit than the men to do their job.

This is only the beginning for me. For her. I’m sure I’m overreacting and that nothing like this is going to happen today. If it does, I only pray that she retains her confidence with who she is and what she likes, and that she talks with me about it. I am sure that we will face this eventually. I never want to see her spirit squashed. Looks like I will have work to do before she hits public school. 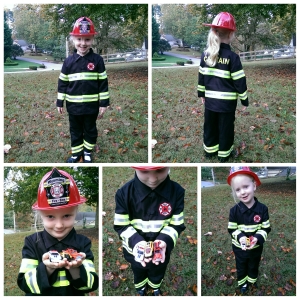 *****UPDATE***** So I went to the second half of her class party to observe and she was incorrect on a lot of the costumes…surprise, surprise. She’s four. Clearly she was the only girl in a neutral costume, but she told me that everyone said to her, “Hey, Sasha! I love your firefighter costume. It’s really cool!” I’m taking that one for what it is because even if it’s not true, she clearly felt good about herself and that’s what matters most. Watching the class play in the big room inside because it was getting yucky outside (and who wants to mess up a costume on the playground?), I could see that she does have more in common with the boys than the girls with the way she plays. I watched her try to break in and participate a few times with “the” group of girls, but with no avail. I plan on talking with her about it at some point, once I can find the right words to help give her the tools that she needs. Wish me luck!

One thought on “There’s a first time for everything”

My kind of place #craftbeer #chocolatemilkstout #dejamoo #drinklocal @hiddenspringsaleworks #beerisback
Today, Busch Gardens!
Finally! #mysweetsugarbee was so happy that they had her favorite #creamsicle and I enjoyed my #darkchocolate and #peanutbutter #fatty
A girl and her #poppop
#mysweetsugarbee was a #happygirl this afternoon
This view does not suck